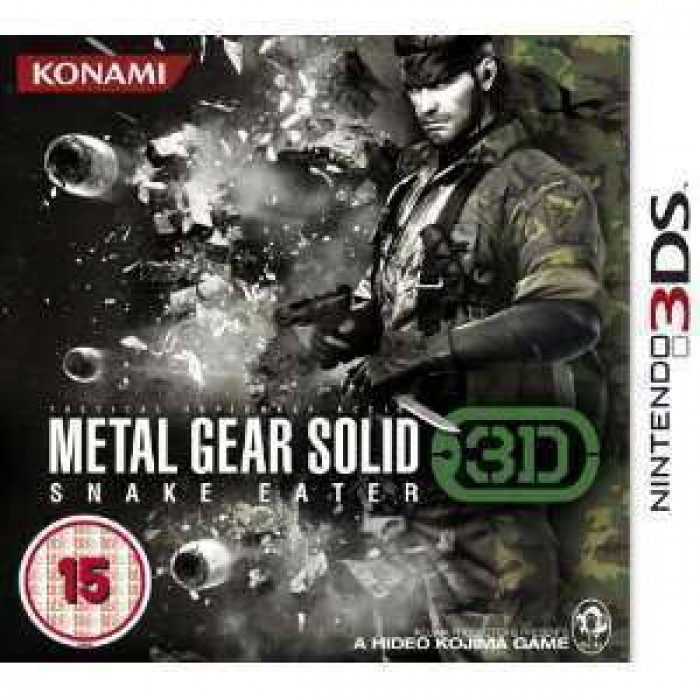 METAL GEAR SOLID: SNAKE EATER 3D is set during the Cold War of the 60s, and sees series hero Snake infiltrating the Soviet jungle to bring back a scientist being held against his will. Starting on the outskirts of a military base, the player must use Snake’s stealth skills along with the foliage and shade that the jungle offers as cover to infiltrate unseen. As the game progresses, old faces make unwelcome appearances and a series of terrifying boss characters must be defeated before leading up to a dramatic twist that brings Snake face to face with a key figure from his past…

The new game springs to life in 3D, with the jungle’s dense foliage and craggy outcrops acting as truly immersive cover as the player works their way through the lush setting. The game also takes full advantage of the split-screen format, enabling easier access to Snake’s inventory, which is now located below the main action. The game also supports gyro synchronization, for special actions like balancing on narrow ledges that will draw players further into the world of MGS. Similarly, targeting enemies is now made simpler with the addition of Circle Pad Pro-compatibility, with the second Circle Pad allowing users to target distant foes with ease.

Concealing one’s self and sneaking up on guards is central to METAL GEAR SOLID: SNAKE EATER 3D, but the 3D elements make key boss battles and exploration all the more incredible. The Nintendo 3DS title utilises a first-person view in which the foliage can be seen brushing past as Snake moves through it, and the many creatures that inhabit the locale will attack if Snake disturbs them. However, these can also be killed and stored as rations, highlighting how Snake must also overcome his surroundings while undercover on his mission…

Another addition exclusive to METAL GEAR SOLID: SNAKE EATER 3D is an all-new camouflage photography system. Within the game, Snake can alter his ensemble to match and blend in with his immediate environment and the possibilities can range from brick-coloured fatigues within buildings, to the classic camouflage khakis of the jungle. Users can now take a picture of real-life items and create a camo suit based on them – although the extent of its effectiveness will vary depending on how well your pictures blend with Snake’s environment!