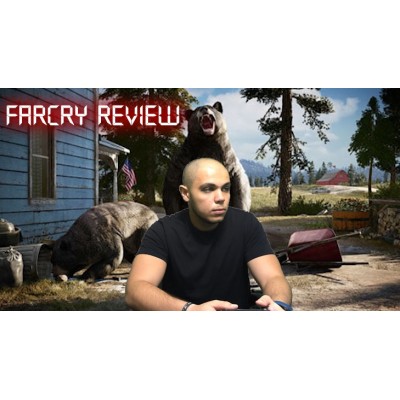 Ubisoft has made a positive comeback this year by refreshing the Assassin’s Creed franchise. This march Ubisoft brings us the fifth main title in Fa rCry series. The question here, does Ubisoft brings back FarCry from its fall after the perfectly done FarCry 3 or is it like the past two games FarCry4 and Primal. That is what I am going to discuss with FarCry5 Review ….

Story: A joint operation between the United State Marshals and the county sheriff’s department – consisting of Sheriff Whitehorse, Deputy Marshal Burke, Deputies Hudson, Pratt and an unnamed Junior Deputy – arrive at Eden’s Gate to serve Joseph Seed with a federal arrest warrant on charges of kidnapping with the intent to harm. Although Joseph offers no resistance, he claims that God will not allow him to be detained. As he is escorted away, cult members attack the task force, causing their helicopter to crash. Joseph escapes and leads the cult in capturing the surviving task force members. That Deputy which is the protagonist survives the crash with the help of Richard “Dutch” Roosevelt. He explains to the Deputy that the cult has interpreted the attempt to arrest Joseph as the fulfilment of his prophecies. Believing the end of the world is upon them, they have begun “The Reaping”, a concentrated effort to purge Hope County of sin. So your main goal is to reach to Joseph Seed (Father) and by doing so you will see the map is divided into 3 territories each one is controlled by one of Joseph’s sibling. Therefore, you need to liberate each territory to be able to face Joseph. The story is good. However, I am always against having the main hero silenced, he is like a spectator without any development after all the things he went through. The villains in the game I wanted to see more of them each of them has his own way of thinking especially Joseph, his beliefs and notions made me want to see more of him but I was disappointed. (8/10)

Gameplay: I want to start this part by thanking Ubisoft for removing the towers, as they make fun of it at the beginning of the game. So as we all know FarCry in general is a first person shooter which is set in the open world of Hope Country in Montana. I had so much fun in this part whether I was fighting on land, sky, or even water. The game offers you a variety of different weapons and explosives. However, there are no major differences between them, as you will proceed this game with an assault rifle, a shotgun, and a RPG. There is a perk system which helps you to upgrade and utilize you character. The perk system works with a list of challenges each challenge grant you a certain amount of perk points to invest in your perk tree. The game also features a recruitment system in which the player can recruit locals in the county to fight alongside them similar to the “Buddy” system used in Far Cry 2 or the “Guns for Hire” system in Far Cry 4. In this Guns for Hire system you recruit different types of people with different skills, scout, plane, scan, or stealth. FarCry 5 gives you a complete freedom to finish the game, as you have to liberate 3 territories from the 3 Seed siblings. You will have many missions to do so that you provokes the leader of the territory to face you.

So you are free to start with whoever you want, this style of game reminds me of Legend of Zelda: Breathe of the Wild, for you will receive the main quest to defeat the main villain at the beginning of the story. What I did not like is there were some repetitive parts which is ordinary for an open world game. You now can Cooperate with you friend to finish all the story mission. Although I did not try the Co-op mode, but I heard that the game will only record the achievement and progression in the story for the host only and not his friend. (8.5)

Graphics & Sound: I can say that I was amused of the design of Hope Country. However, there was a huge amount of trees. But the visuals were amazing especially the light reflection with the fog. The 3D map design was perfect when you zoom in while accessing the map you will find a 3D model of the whole country. While the sound was also perfect, I enjoyed all the soundtracks that I sometimes open the menu or the map to listen to it. The voice acting were on the point. (9/10)

Verdict: Ubisoft has done great work with their two title Assassin’s Creed and FarCry, as they refreshed them well. So if you are looking for an amazing gameplay with some RPG elements with a good story while listening to country music, then FarCry5 is your game (8.5/10)

Check more of my Reviews