Home » Search » Pokemon Super Mystery Dungeon (Nintendo 3DS)
Shop by Category
Out of stock!
Fill this form to be informed when this product arrives:
Name
E-mail 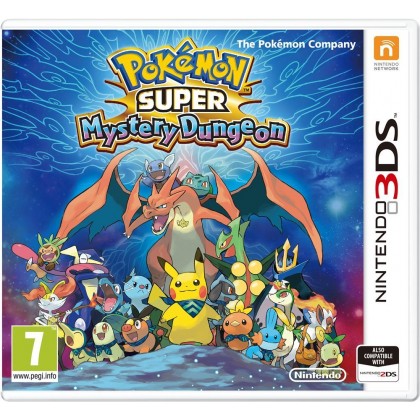 
This recently revealed new instalment in the Pokemon Mystery Dungeon series, Pokemon Super Mystery Dungeon for Nintendo 3DS family systems, finds players becoming Pokemon to explore randomly generated dungeons in a land inhabited only by Pokemon. In addition to the 20 Pokemon players can choose to become and also pick their partners from, every known Pokemon, all 720 of them, are in the game! This game boasts hours of replay-ability as each dungeon is randomly generated, so you'll never explore the same dungeon twice as you unravel this tale of adventure and mystery.

All 720 discovered Pokemon appear in this game, including Legendary and Mythical Pokemon.

Mystery Dungeons are found everywhere and they change their form every time they are entered. The items and treasures will also change every time you enter

The partner Pokemon supports the player and their friendship will help to solve the mystery of why Pokemon are being turned into stone!

Battle alongside Legendary and Mythical Pokemon to save the world from a crisis in a tale of unprecedented scale.