Home » PlayStation » PlayStation 4 Games » Adventure » Gravity Rush 2 (PS4)
Shop by Category
Out of stock!
Fill this form to be informed when this product arrives:
Name
E-mail 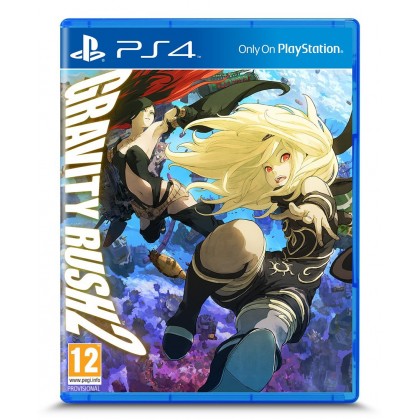 Experience the thrilling conclusion to Kat’s mind-bending adventures as she chases the mystery of her origin across a huge new open world. Wield an arsenal of hard-hitting gravity-based attacks in three different gravity styles against powerful new enemies, unleash devastating tag-team attacks with Raven by your side, and ward off a new danger that threatens the world and the fabric of the universe itself.

Gravity Rush 2 is the sequel to the critically-acclaimed, gravity-shifting classic, developed exclusively for the PlayStation 4 system by SIE WWS JAPAN Studio.

In a new story set just after the conclusion of the first game, Kat returns with her gravity-shifting partner Raven and the police officer Syd to investigate strange gravitational waves appearing over Hekseville. The next adventure for the gravity queen begins when Kat is swallowed by a gravity storm of unprecedented scale and taken to a remote mining village.

Separated from Dusty, the source of her gravity powers, Kat is forced to mine ore for the village to earn her keep along with Syd. However, they soon face the dangerous Scarabs lurking near the storms – a new breed of Nevi that threatens Kat and the village...

KEY FEATURES:
･Gravity-Based Action –The franchise’s famous gravity-based action mechanics have evolved with two additional styles: the lighter Lunar Style and heavier Jupiter Style. In battle, players can seamlessly switch between the three distinct gravity styles, each with their own unique attacks.

･Jump to PS4 – Boasting larger environments, more physics effects and an expanded story, Gravity Rush 2 is a giant leap forward from its predecessor.

･Vast Open World – Enter a bright and bustling floating city, bursting with life. Manipulate gravity with the motion sensors of the DUALSHOCK 4 wireless controller to soar and traverse a vast and detailed open world, 2.5 times larger than the original, packed with an abundance of missions to keep Kat busy.

･Enemy Variety – Battle against not only Nevi, but trained soldiers, armored mechs and massive bosses, along with brand-new supervillains.

･Rich and Exciting World – Delve deeper into Kat’s background with an all new story, new characters, side missions, and more.